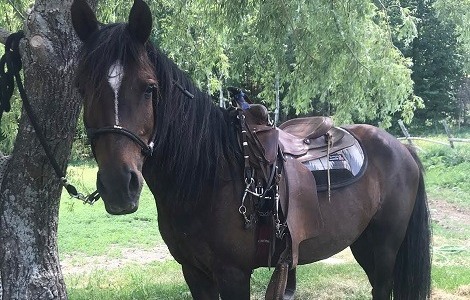 Growing up, I was always just a little self-conscious about my ears. They’re fine on their own, but it’s the way they part my hair and jut out just enough so as to make themselves present that I dislike. As an aspiring social worker and the daughter of musicians, perhaps it’s fitting that they do so — much like Little Red Riding Hood’s ‘grandmother’ once said, “All the better to hear you with!” Perhaps they also contributed to my attraction to horses, a kinship built on auditory appendages.

Like so many young girls, I begged my mom for horseback riding lessons until she gave in, and I delighted in those riding school horses who good naturedly carried me around arenas and trails. The time for me to outgrow the hobby came and went, and if anything,  intensified when I found my teenage self at a farm that was to become my second home. I remember the moment I was first approached by a five-month-old colt with floaty nostrils and big brown ears that he, too, had not quite grown into.

As an immigrant from Scotland sporting an accent, celebrating Shabbat and Hanukkah in small-town Maine, it’s safe to say I had become accustomed to not quite fitting in. Between my own international move, my parents’ stories of wanderlust, and a culturally Jewish background filled with tales of displacement, my concept of home was something fluid.

This northern Maine farm showed me a new definition of home, one in which we could set our calendar by lilacs blooming and knew just where to place a single log as to divert water from where it might otherwise pool. The family of three generations that knew this plot of land so intimately showed me what else a home could be, and it was in this place, surrounded by horses, that I felt belonging.

Shortly after finding my way here, the young colt was offered to me as a training project. I was convinced this was my chance to take everything I had learned thus far and apply it to our work together. Determined to do everything right, I was certain that within a matter of years training would be complete, and I would end up with a safe, sound trail horse.

In our fourteen years together, Ransom and I have yet to run out of things to talk about. What once seemed like a straightforward series of steps to train this horse spiraled into tangents through which we developed ways of negotiating space and our relationship. The more I learned the more I realized what was left to learn; the deeper I listened the more nuance I heard. Ransom is, by nature, an incredibly sensitive animal and for the time we’ve spent working together — half of my life, the whole of his — undoubtedly more often than not I have been the student.

The work we have done has, in some ways, reflected and informed my role as a student working towards a Master’s in Social Work, particularly when it comes to releasing expectations and staying present to the needs of a given moment. In school, we return to the phrase: “in service of the client,” and I continually ask myself, with horses as often as with people, about who gets to answer this question. Many of these realizations came about this summer at a moment when my horse said, “No” at a time that I was not prepared to listen.

The horse world doesn’t give a lot of room for animals to say, “No.” We may look for reasons behind the resistance — first checking for pain, then assessing behavior or temperament in order to find the solution that takes us toward the desired result. Still, though, there is a goal, whether it be for the day or overarching, and if we can solve the issue we can get back on track.

Yet I have to ask myself where these goals came from, both with horses and in my budding work with clients in the social work field. My horse does not likely wake up on Saturday mornings excited to have equipment strapped on his back and a human being perched on top, and while our partnership incorporates this as part of the deal there are times where I have done us a disservice by insisting on my daily agenda.

With only his actions to communicate, listening takes a very different form; I think about this with my clients too, and the behaviors they use to communicate. It goes further than that, though, and depends on the way we, as social workers and equestrians, are prepared to listen to a story as influenced by our own contexts and narratives.

As it happened a few months ago, I arrived at the farm one afternoon on a rare day that I had the place to myself. Ransom and I have a certain routine we’ve adopted over the years; by the time I open my car door to that unmistakable sweet farm scent and call his name he’s already by the gate. If I’m too slow meandering my way up to his pasture, distracted by soft noses attached to big heads that bend their way over fences to say hello, it’s not uncommon for my pony, sassy as ever, to stretch his head over to where his halter hangs off a wooden pallet and grab it with his teeth only to drop it on the ground. If I’m very slow he might start to paw the ground or shake his head at me, the epitome of an unimpressed teenager.

On this day, however, Ransom looked up when I called his name then returned to munching on his hay with his two other pasture mates, and when I approached him he even ventured a few steps away from me. Insistent that we were going out that day, I haltered him nonetheless and brought him down to the hitching rail to groom and tack up my companion. In the back of my mind I knew that based on what he was showing me so far we might not have a good ride, but I was also balancing the voices I’ve been steeped in of being in charge around the horse, and not letting them get away with misbehaving. In some ways, my fear of others’ judgements should I not ride the horse led me to a situation that was actually frightening.

The horse I took out on a ride that day was not the horse that spent the previous summer at a kid’s camp patiently toting around bouncing, squealing children. Nor was he the animal I’ve ridden down a slippery mountainside after a rainstorm, carefully working as a team to find the best footing to guide down the other horses and riders we had in tow. This was my horse about as anxious as I’d ever seen him, balking every other step, glancing in all directions but forward.

I can’t say if he was in pain that day, or feeling fresh as we were still early in the season, or if he just didn’t feel like going, but it was too hot to fight and we made the smallest loop possible back to the farm with not a single moment of ease along the way. The closer we got to home the more the creature under me seemed to resemble a gust of wind more than a fully three-dimensional figure, and only by walking in tight circles down the length of trail was I able to contain the tornado animal. Yet, we made it home, and no matter how frustrating a ride is the horse’s well-being comes first. I untacked and hosed off the sweating thing that was starting to resemble a horse again, and returned him to his pasture.

As I continue to work with horses and people, my vision of what it means to be a social worker is evolving. Stepping into this role does not mean having all the right answers or solutions at the ready, but taking into account the voices of clients to promote cohesion while working towards mutually agreed upon goals. I left the farm that day wondering what I could have done differently had I released myself and my friend from external perceptions of what should have happened. I could have simply brought him down to the hitching rail and groomed him, or brought him out of his pasture to graze, or I even could have tuned into the behavior he was sharing with me from the start and said a hello before taking out a different horse to work.

A beautiful thing about these animals is that they do not, cannot, lie and their behavior is the only means we have with which to communicate.

Entering into my professional work with people, who also use their behavior to communicate, I am left pondering the ways I allow for or hinder a story to be told exactly as it is intended on any given day. I am also reminded how important the relationship is to the way a story is both told and received; because I know Ransom, I have enough history to contextualize his actions, but also enough to have set an expectation that fits our typical capacities. The story shared here is my version, and to whatever extent horses narrate their experiences Ransom has his own. I might guess though that, ultimately, we were both left thinking, “s/he just didn’t listen.”

I am perpetually being taught by this animal, as well as so many other animals and people that provide wisdom in various forms. There is a famous quote in the horse world by a French riding instructor, Antoine de Pluvinel: “You can never rely on a horse that is educated by fear. There will always be something that he fears more than you. But, when he trusts you, he will ask you what to do when he is afraid.” Of course, at the end of the day, people are not horses, and yet the need for trust is the same.

Should I be so bold as to add to Pluvinel, I might offer a reminder that trust is not a stagnant, static thing. Trust is ongoing collaboration that requires being present with whatever is that day, and adjusted accordingly. It means reflecting on our behaviors, and taking accountability for the times that we make mistakes. It is releasing individual expectations to make space for collective experiences and a story more frustratingly complicated and interesting than a single plot line. I will continue to listen to Ransom to the best of my abilities, and I trust that we have a great deal more to teach one another.